A specific series of peptides, called a cell-penetrating peptide (CPP), is known to be free to directly permeate through cell membranes into the cytosol (cytolysis); hence, this CPP would be a potent carrier for a drug delivery system (DDS). Previously, we proposed the mechanism of cytolysis as a temporal and local phase transfer of membrane lipid caused by positive membrane curvature generation. Moreover, we showed how to control the CPP cytolysis based on the mechanism. Here, we introduce key factors effectively modulate the CPC cytolysis so that they could be potent tools to control cytolysis. This short communication gives overview of our progressive investigation on the CPC cytolysis mechanism which inspired us to imagine many ways to control the cytolysis either to enhance or to suppress by maneuvering membrane curvatures corresponding to the temporal phase transitions of self-assembled membrane lipids under the liquid crystal states. We have shown the usefulness of physical stimuli such as osmotic pressure or particle size and chemical stimuli with their Hoffmeister effect to the outer medium by changing the hydration level of outer layers of membrane to control the CPP cytolysis by changing membrane curvature. Taking all the revealed vital factors and their effects as a tool, we will further explore how to control CPP cytolysis for developing a DDS system combined with appropriate cargo selection to be tagged with CPPs.

The discreetness of cells is the key to life, with bio-membrane separating interior cytosol from the environment. In this regard, the cytosol is never connected to outside media, even during cell fission or fusion. However, a water-soluble peptide called a cellpenetrating peptide (CPP) had been known for its penetration ability through bio-membranes without incorporating a particular transporter or receptor. Moreover, it is expected to be a potent carrier for drug delivery systems (DDS) [1-5]. There are two pathways for CPP's internalization: direct membrane permeation to the cytosol (cytolysis) and endosome mediated uptake (endocytosis) (Figure 1) [1]. Cytolysis is a preferable way of CPP for DDS as it can deliver drugs directly into the cytosol. While CPP encapsulated in the endosome must cross the endosome membrane to reach the target in the cytosol. Although there are many investigations reported for CPP internalization, no conclusive cytolysis mechanism is known. Our objective is to find a way to control the cytolysis of CPP by exploring its mechanism. 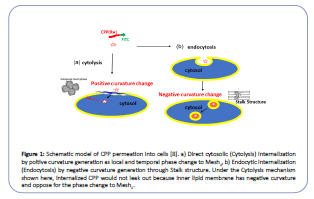 Wender et al. revealed the necessary structural requirements to be a CPP, which has plural strong cationic moiety, such as guanidium groups close together. They also found that the peptide backbone is not indispensable and showed that peptoid or even polyamine could be a potential CPP [3]. These data suggest that cytolysis is not a specific molecular interaction, like enzymatic reaction or ligand and receptor interactions, between CPP and membrane lipid. Therefore we have taken physicochemical approach to explore CPP's transmembrane penetration as a biophysical phenomenon of membrane structure and function [6-8]. Bio-membrane has a lamellar bilayer structure (Lα) under the state of lyotropic liquid crystal (LC). The Lα state makes cell membrane flexible enough to accommodate cells to change shapes while keeping ordered lipid orientations as a barrier. It is generally known that LC, as a highly ordered self-organization of amphiphiles, has a series of structures such as lamellar (Lα), cubic (V1), and hexagonal (H1) (Figure 2). The molecular geometry parameter of amphiphile (Surfactant Parameter: SP, defined by Israelachvili et al.) determines each LC's topology [9-11]. The SP value corresponds to the hydrophilic part's proportion and the hydrophobic part in the amphiphile and correlates to the surface curvature of molecular assembly as LC. The SP value is determined by the structure of amphiphile and expressed as SP=v/(a × l) (Eq. 1), where a is the cross-sectional area per molecule at the hydrophilic-hydrophobic interface, l is the length of hydrophobic parts and v is the volume of hydrophobic parts shown as Figure 2. Hyde et al. reported the importance of intermediate structures between lamellar (Lα) and hexagonal ( H1) especially the Mesh1 phase, for biological functions. Interestingly, Mesh1 has a unique structure of undulated lamellar bilayers, with periodical pores to connect water layers, as shown in Figure 2C [10,11]. 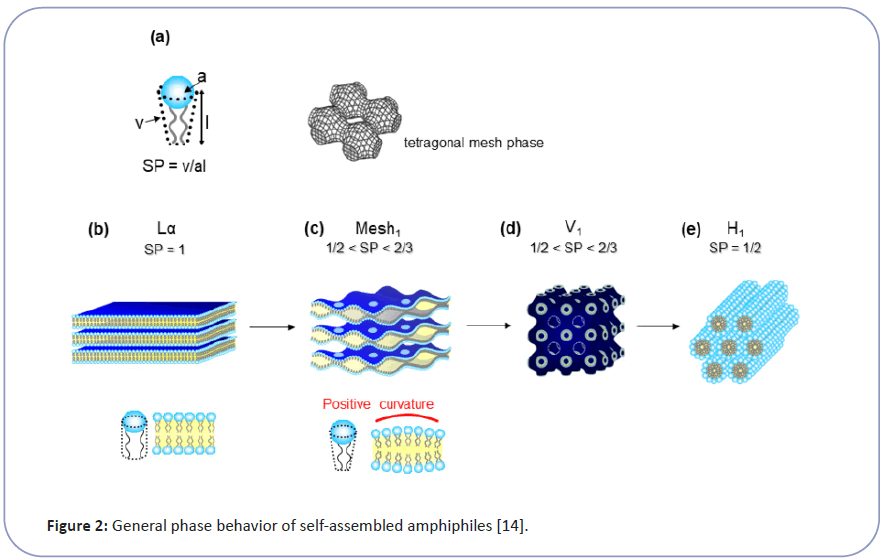 Taking this into account, we have investigated the mechanism of CPP cytolysis. Our hypothesis for CPP cytolysis is as temporal and local dynamic phase transition from Lα to Mesh1 caused by electrostatic adsorption of CPP molecules generating positive curvature [6-8] (decreasing SP by increasing a by Eq. (1)) (Figure 3). Oligo arginine (Rx) as CPP with condensed cationic charge interacts with the phosphate anion of lipid membrane to change the membrane curvature of the contact point more positive, which corresponds to the local and temporal topological deformation of the membrane to Mesh1. Through the local pore structure of Mesh1, a strongly cationic CPP interacting with phosphate anion can move into the interior cytosol, then be released into the cytosol as shown in Figure 3 [6-8]. Because this phase change is local and temporal within the fluctuation of lipid molecules as LC, there would be no pores remaining afterward. This hypothesis can be illustrated by the analogy of "The Man (Mr. D) who could walk through walls" [12] explained in Figure 4. Namely, When Mr. D approaches the wall (CPP adsorbs to the Lα membrane), the wall surrounding him melts into a fluid (Lα turns to Mesh1). Then Mr. D found himself at the other side of the wall (CPP can move into the cytosol through the temporal Mesh1 pore); there is a hard wall behind Mr. D (the membrane then returns to Lα). If the wall (membrane) is resistant to changing its curvature, Mr. D (the CPP) will have difficulty walking through the wall (penetrating the membrane). 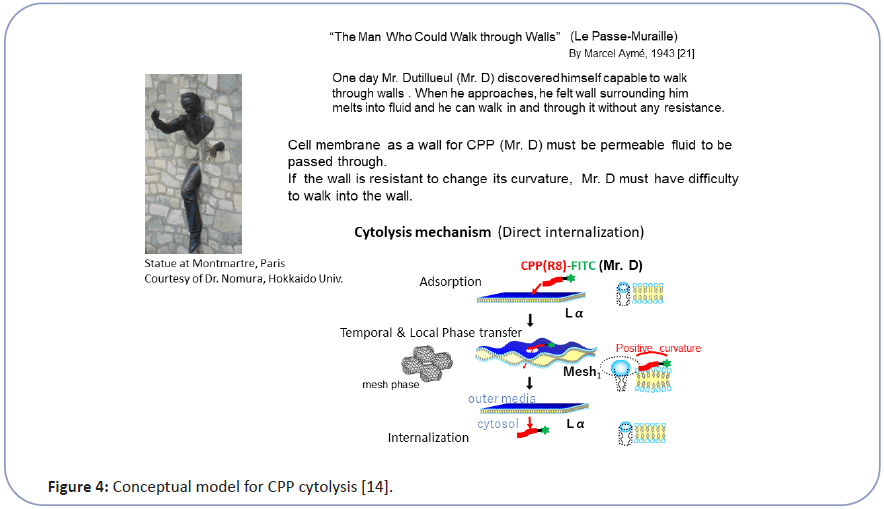 We have confirmed that oligo-arginine (Rx) as a CPP changed the Lα structure of membrane lipids under the equilibrium condition based on the SP theory. Hexa-arginine (R6) as CPP made the SP reduction for Lα of di-oleoyl-3-phosphatidylcholine (DOPC) with water. Namely, a small amount of R6 increased the interlayer spacing of the Lα lamellar structure attributed to the curved deformation of planar Lα to the undulated lamellar layers, with periodical pores as the Mesh1 phase [8]. Moreover, we predicted that we could control CPP cytolysis by changing the membrane curvature. To show the curvature effect for cytolysis, we choose erythrocyte, which has negative mean curvature. Erythrocytes can flexibly change their shape because of their biconcave disk shape. We found erythrocytes to be resistant to cytolysis because of their negative mean curvature. Under lower osmotic pressure, the cytolysis of CPP to erythrocyte increased by swelling to make the membrane curvature positive [6-8]. We have recently investigated the critical process and factors controlling CPP cytolysis by using giant unilamellar vesicle (GUV) composed of phospholipid as model cell membrane [12]. As a result, we found that adsorption and cytolysis are assumed to occur successively when the CPP molecule comes into contact with membrane lipids. Adsorption is quick to saturate, while cytolysis proceeds at a constant rate in time for each adsorbed CPP molecule. By changing the osmotic pressure, we confirmed that the membrane curvature is the key to cytolysis as a local and temporal phase transition from Lα to Mesh1 [13].

Then, we investigate the phospholipid vesicle's size effect on CPP cytolysis because this is the most straightforward way to control membrane curvature [14]. Contrary to our expectation, we found that the smaller the vesicle diameter (meaning a higher membrane curvature), the more cytolysis was suppressed. Such controversial findings led us to seek the reason for the unexpected results. We found out that the mobility of membrane lipids as a liquid crystal is the key to cytolysis. As a result, we could explain the cause of cytolysis suppression by reducing the vesicle size because of lipid mobility restriction. Osmotic pressure reduction to enhance positive curvature generation works as long as the membrane is mobile enough to modulate the local structure but vesicle size should be larger than 1,000 nm. Taking all the revealed vital factors and their effects as a tool, we will further explore how to control CPP cytolysis for developing a DDS system combined with appropriate cargo selection to be tagged with CPPs .

As such, we found CPP cytolysis occurs only at the condition when the bio-membrane is under a lamellar liquid crystal phase to be mobile. This requirement could be filled primarily by the planar membrane with negligible curvature strain to adapt local or even whole topological modification. We found a threshold level in the vesicle size is c.a. 1,000 nm to satisfy this condition. When the vesicle is smaller than that, membrane lipids become rigid or immobile to resist temporal phase transition to Mesh1 because of the curvature strain. As such, planarity is substantial for bio-membrane to be flexible enough to accommodate necessary local topology changes, which is the key of controlling the stimuli responsive barrier function of the cell membrane. This consideration led to come up with the question as "What is the cell or vesicle size that frees lipid molecules in bilayers from membrane curvature strains?" and "Why is the size of the self-reproducible eukaryotic cell over ten μm?" as reported [15].

This work was partially supported by The Cosmetology Research Foundation.

K.S. proposed the overall design and hypothesis of the research and designed experiments.

The authors declare no competing interests. Correspondence and requests for materials should be addressed to K.S.