Hereditary Angioedema Type 1 and Serious Vascular Lesions Associated with Segmental and Focal Hyalinosis: Is there a Causal Connection?

Copyright: © 2017 Serigne G, et al. This is an open-access article distributed under the terms of the Creative Commons Attribution License, which permits unrestricted use, distribution, and reproduction in any medium, provided the original author and source are credited.

Hereditary angioedema (HAE) is rare; it is usually a monogenic, genetic disease with autosomal dominant transmission, resulting in C1-inhibitor deficiency (C1InH). Renal involvement associated with HAE has been known for nearly thirty years. We are reporting on two observations of a father and his daughter presenting a glomerulonephritis evolving towards to CKD class V. Renal needle biopsy had evidenced acute vascular lesions associated with segmental and focal hyalinosis. Since these lesions were not described, we discussed the possible causal links with HAE. The accumulation of bradykinin caused by mutation in C1-Inh could have been misleading, considering all the beneficial vascular and renal effects widely described in the literature, if we stick to that fact, in the study of vascular and glomerular lesions. On the other hand, taken as a whole, HAE appears to pave the way for the development of a glomerular and vascular disease: dysimmunity, circulating immune complexes, and vascular hyperpermeability favor deposition of immune complexes, overexpression and activation of B1 receptors.

Hereditary angioedema (HAE) is a rare genetic disease. It generally appears as a monogenic, and autosomal dominant disorder. Its prevalence is reported ranging from 1/10000 to 1/50000 [1]. It was described for the first time by Osler in 1888 as ‘angioneurotic edema’. Details of three types are: HAE type I and II related to a quantitative and qualitative deficit of C1-inhibitor (C1Inh); and type III is caused by an increase in kininogenase activity [2,3]. C1Inh is a serine esterase which acts as regulator of the early proteins common with the classical complement pathway by dissociating C1rs from the C1qrs complex. It is encoded by the SERPING1 gene (SEr-Protease Inhibitor G1); location: 11q12-q13.1. C1Inh deficiency causes hyperactivity of the classical complement pathway, resulting in immunological diseases and the deposition of immune complexes, such as Lupus, membranoproliferative glomerulonephritis, autoimmune thyroiditis, etc. [4-6]. The C2b fragment, Prokinin, under the enzymatic action of plasmin and that of the kinases of the kinin-kallikrein system, is turned into bradykinin. Its action on ubiquitous B2 receptors, vascular in particular, causes vascular hyper permeability thus constituting the physio-pathological basis of the clinical manifestations of acute attacks of HAE [7]. Renal involvement of HAE is in the form of glomerulonephritis, the histological types of which are membranoproliferative glomerulopathy, mesiangiopathies, IgA nephropathy and fibrillary glomerulonephritis [4,8-10]. A case of extra-capillary lesions due to severe vascular disorders has been reported by Ohsawa et al., where the hypothesis of bradykinin-induced angiogenesis has been raised [11]. We report on two cases of severe renal vascular lesions associated with segmental and focal hyalinosis in a HAE type I-affected family.

Mr. L.B., is known to have had HAE since childhood, and treated with Danazol 200 mg/day. His mother and maternal aunt were carriers of the mutation and the latter had CKD. His sister is also suffering from HAE; she is currently treated in the nephrology unit for a microalbumunuria with normal renal function (Figure 1). Kidney disease began at 51 with proteinuria of 0.8 g/24 h, gradually increasing to 3 g/a day without nephrotic syndrome (63 g/L protein and 34 g/L albumin) with normal renal function. Nine years later, a grade III hypertension was evidenced, associated with moderate renal insufficiency and microscopic haematuria 25/mm3. The immunological assessment was negative and renal needle biopsy puncture was performed in 2001. The latter had 27 glomeruli, 17 of which were sealing wafers. Three glomeruli were retracted in the course of sclerosis within a fibrous capsule, two of which were the location of former segmental sclerosis with synechia. The 7 permeable glomeruli, slightly increased in size, were the site of a mesangial hypertrophy associated with a mild hypercellularity graded according to the stems; one in seven glomeruli showed segmental sclerophyalinosis with synechia. Major lesions of nephroangiosclerosis have been noted, particularly at arcuate artery level. There were extensive inflammatory interstitial fibrosis areas containing atrophic tubes. 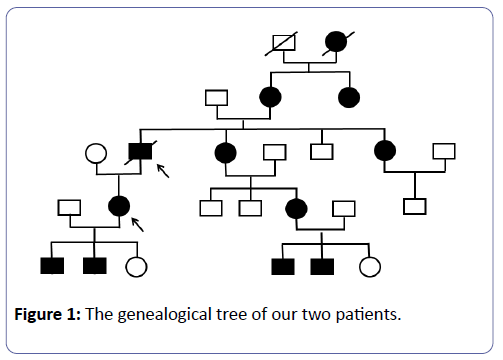 Figure 1: The genealogical tree of our two patients.

The immunofluorescence test showed anti-IgG-labeled deposits on 5 glomeruli along the glomerular basement membrane (GBM), and significant vascular and glomerular deposits labeled with anti-IgM, -C3, -C1q. There were no deposits labeled with anti-IgA. Its renal function deteriorated gradually from 2001 to 2005 (Figure 2). He received no nephrological treatment from 2005 to 2007. Kidney disease reached the final stage in February 2008. He was hemodialysed in emergency on temporary catheters complicated by staphylococcus aureus septicemia as well as a rupture of infected upper left popliteal artery aneurysm, the development of which was favorable after febapoplasty bypass surgery and a well-adapted antibiotherapy. Three months after hemodialysis, he presented a digestive symptomalogy suggestive of mesenteric ischemia. Abdominal angiography revealed a jejunal thickening without mesenteric ischemia. The enteroscopy was not done because the enteroscanner performed 5 months later had not evidenced the initial jejunal thickening. Acute attack of angioedema was then considered as the cause. Mr. L.B. died in March 2009, at the age of 63 in a context of massive gastrointestinal bleeding complicated by haemorrhagic shock. Mrs. C.S., aged 45, Mr. LB’s daughter, carries heterozygous mutation (c.1350-1355del) in exon 8 causing a modification of the total protein (p.Glu429-Thrr452del) and of the secreted protein (p.Glu429-Thr430del). She has been under Danazol since childhood. She is G3P3, and two of her children are carriers of the same mutation. Immunological analysis performed in 2007 showed a subnormal C1-INH antigen of 204 mg/L (reference values: 210-345 mg/L) and a reduced functional dosage of C1- INH of 8.4 U/mL, i.e. 38% of the reference value. A similar functional and weight deficit had been evidenced in her two children. She had previously self-limiting angioedema attacks after C1-INH infusion, pre-eclampsia in 2005, and an operated thyroid nodule. Renal disease began in 2005 following pre-eclampsia due to the persistence of nephrotic proteinuria and mild hypertension. A PBR was then performed in 2006, but the sample was not representative because it contained only 3 glomeruli. There were nevertheless segmental and focal hyalinosis lesions and notable vascular lesions with immunofluorescence labeled with anti-C3 and anti-IgM. The immunological status was normal, as was renal function. Like her father, she did not have any nephrological treatment from 2006 to 2013. Renal function was normal until 2010 with the persistence of nephrotic proteinuria. In June 2014, serum creatinine varied between 186 and 200 μmol, i.e., a glomerular filtration rate of 27 to 25 ml/min as per MDRD (Figure 3), and 24 h proteinuria was between 4 and 8 g. The Holter monitoring reported a balanced blood pressure during the nycthemer. A GFR test was performed again with a non-representative sample of 6 glomeruli, including a pre-sclerotic and 4 in sealing wafers. The permeable glomerulus was ischemic with a retracted appearance within the urinary chamber, and included segmental mesangial proliferation. In the five arterial sections present, there was increased sinuosity and a concentric hypertrophy of the media like an onion bulb. The interstitium was the site of inflammatory fibrosis spreading over 50 to 60% of the renal parenchyma. The tubules were atrophic, some of which were in the process of pseudo-thyroid mutation. The tubular epithelium was flattened. The fragment for the Immunofluorescence Assay did not have much effect. The evolution showed a progressive degradation of renal function (Figure 3) requiring hemodialysis in January 2016. She received a kidney from her husband 3 months later. Exploration of the complement system prior to transplantation was unusual.

Like the hereditary deficiencies of early proteins in the complement system, mutation in C1-INH inhibitor gene is sometimes accompanied by dysimmunity, resulting in an increase in the prevalence of autoimmune diseases and deposits of immune complexes [4,12-14]. Indeed, the NIH team found 12% of dysimmune manifestations in a series of 157 patients with HAE, including 3 cases of membranoproliferative glomerulonephritis associated with circulating immune complexes [4]. The persistent interaction of complement proteins with their adaptive cellular receptors is probably the molecular basis for dysimmunity [15]. Vascular involvement, although not described, could be observed in HAE through two probable lesion mechanisms: vascular deposition of circulating immune complexes and bradykinin-induced angiogenesis. The vascular involvement in our two patients seems to be related to immune complex deposition as evidenced by the vascular deposits labeled by anti-IgM, -C1q and -C3 under the immunofluorescence test. Focal segmental glomerulosclerosis (FSGS) lesions are not described as part of HAE. The hypothesis of nephron reduction seems unlikely in our patients because nephrotic proteinuria appeared long before the renal function deteriorated. This cast suspicion on a causal link between FSGS and HAE. Could bradykinin-induced vascular hyperpermeability be a contributing factor? Is there any immunologic vascular permeability factor as in primary FSGS? Given the current state of knowledge about HAE, these questions remain unanswered. On the other hand, the role of B1 (B1R) receptors as part of the pathophysiology of FSGS lesions is well established by the adriamycin-induced FSGS model in mice. Indeed, the injection of adriamycin leads, in addition to albuminuria, an early expression in 24 h of B1R gradually increasing until D14 [16]. Administration of B1R antagonists significantly reduces albuminuria but also increases podocin synthesis [16]. It is thus clear that although it is true that bradykinin has renal and vascular beneficial effects via an impact on B2 receptors, it remains nevertheless a deleterious effect by its B1 receptors. Indeed, the renal tissue lesions induced by the deposits of immune complexes could generate an overexpression of the B1 receptors. Therefore, their activations resulted, inter alia, in mesangial cell proliferation and podocytopathy [16,17].

Vascular involvement is quite possible during HAE. With regard to all the vascular and renal benefits of bradykinin, which are widely described in the literature, patients with HAE should be safeguarded by this nephro and vasculo-protective system. Nevertheless, we find the opposite in both patients. In fact, HAE ensures the favorable conditions for the development of a glomerular and vascular disease: dysimunity, circulating immune complexes, and vascular hyperpermeability favoring the deposition of immune complexes, and overexpression and activation of receptors B1.